There are plenty of websites to watch Asian dramas online with subtitles, but these 10 best sites have the most popular streaming content.

“Dramacool” is a website that allows users to watch Asian dramas with subtitles. It has 10 different categories and includes popular titles such as “Descendants of the Sun”. 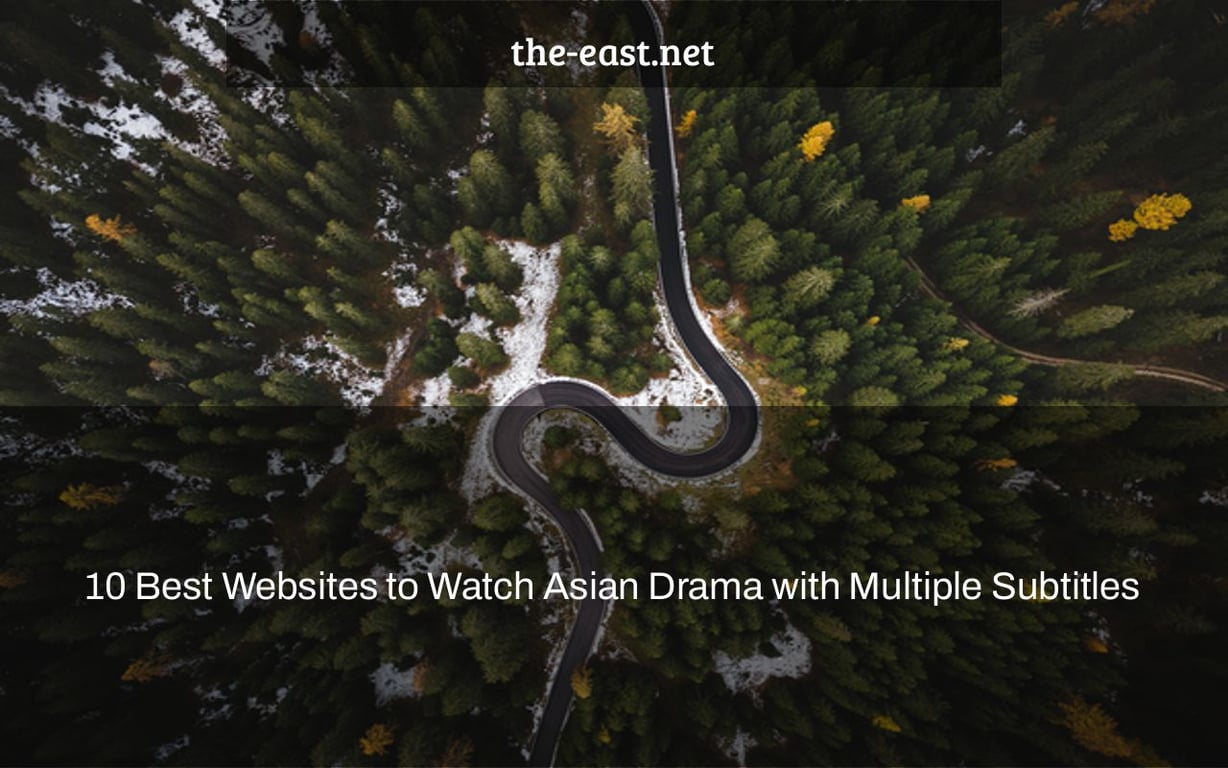 Since the 1980s, East Asian popular culture has crossed regional borders, invading the social lives of people all around Asia.

As a result, East Asian nations such as Japan, Korea, Taiwan, Hong Kong, and China produce the majority of the popular culture’s goods, such as TV dramas, pop music, anime, and so on.

This popular culture phenomena, however, does not just affect East Asia; it also affects Asian nations.

Many studies have attempted to explain the rise of regional countries’ cultural invasion.

This is considered as the start of a new era of globalization, with a format and style similar to that of the West but with a twist for the “Asian Taste.”

In 2022, these are the top ten best websites to watch Asian drama.

If you’re a die-hard Asian drama lover, there are a plethora of places where you can watch your favorite episodes online.

However, not every one of them will provide you with a smooth experience. This is when deciding on the best option becomes difficult.

What if we gave you a list of the 10 finest websites to watch your favorite Asian dramas instead of 1…2… or 5? Let’s get this party started…

Netflix is number one.

Netflix is one of the most widely used video streaming services in the world today. Netflix is the home of high HD quality Asia dramas, with films and TV episodes available in a variety of languages.

This subscription-based service offers subtitled Asian dramas. The greatest thing is that this is an ad-free service, so you can watch videos without interruption.

All you have to do is sign up for one of the three streaming plans: Basic, Standard, or Premium, which start at $9.99 per month and go up to $19.99 per month.

Life, Cain and Abel, and Something in the Rain are among the most popular Asian dramas on Netflix.

Hulu is another video-on-demand provider with a large archive of Asian dramas.

This American subscription-based streaming service, owned by Walt Disney, broadcasts Asian drama, which is one of the most popular series. This category also allows you to watch Korean dramas online.

You can watch your favorite Asian shows on your phone thanks to its mobile app.

There are three subscription categories to select from, with the first one beginning at $5.99 a month.

During the 30-day free trial period, you may watch a variety of Asian dramas and other entertainment.

Once you’ve signed up for the service, you’ll be able to watch your favorite Asian dramas whenever you want.

So, what do you have to lose? Hulu is offering a free trial right now!

Hulu Error Codes: What Causes Them and How Do You Fix Them?

Viki delivers unique material from Japan, Korea, Taiwan, Thailand, and other Asian nations, with a large variety of Asian dramas and movies.

You may view your favorite movies for free for seven days during the trial period. After the trial time, if you enjoy the service, you may pay a monthly membership cost.

Viki offers subtitled material in more than 50 languages and genres. You may look for your favorite Asian shows by genre or by title of a prominent Asian drama.

To watch VIKI Standard episodes, movies, VIKI Originals, exclusives, and worldwide dramas, you’ll need to sign up for a membership plan, which ranges from To unlock VIKI Standard shows, movies, VIKI Originals, exclusives, and global dramas, you must choose a subscription plan that starts from $0.99/month and goes up to $4.99/month..99 to $4.99 per month.

Install the app now to have access to all of the most recent Asian dramas from its massive library.

Similarly, these are the top ten websites where you may watch Korean dramas.

Viu’s material is used by the majority of other Korean drama websites. The site is one of the most popular and up-to-date Asian drama sites, with Korean and other Asian dramas available.

You’ll get access to an infinite number of high-quality movies and programs from 16 countries, including Asia. You may also download any video you like and view it offline at your leisure on the site.

Asian Crush delivers material in multi-lingual subtitles for a wide range of movies and TV series, including dramas, spine-chilling horrors, and thrillers, as well as action, supernatural, romance, humor, and much more.

On AsianCrush, you can watch your favorite Asian drama series and films through applications compatible with smart devices.

To binge-watch exclusive and annoying ad-free material, just subscribe to AsianCrushPremium for $4.99 per month with a 14-day free trial.

Another well-designed website with a large inventory of Asian drama and exclusive releases is KissAsian.

The website has programs with English subtitles that may be watched by multilingual viewers.

You may watch HD movies and Asian and other dramas for free thanks to a user-friendly and easy-to-navigate layout.

DramaGo is another another completely free site where you may watch Korean or Asian dramas.

This is one of the most up-to-date and fastest-loading websites with English subtitles for those who need them.

There are also 5 to 7 servers where you may watch Asian or Korean episodes. With a single swipe on your smartphone, you may search for and download top and super popular Asian dramas like When A Man Loves.

In addition, the website has a number of current Asian dramas that you may view anytime you want.

The NewAsian TV is just a collection of Asian films. The website deserves a permanent presence on our top 10 list for providing a center of top-notch HD quality Asian, Korean, and Japanese dramas.

The website has certain limitations, with material ranging from horror to romance, humor, drama, and much more.

The cherry on top: NewsAsian TV is a completely free streaming service. Despite the fact that the material is unavailable in a few regions, the website is still available in more than 14 nations.

The lights off option, which hides everything but the stream player, is an intriguing feature that you should not overlook. When viewing material in a non-fullscreen mode, this function comes in useful.

So, if you want to watch Asian dramas without being interrupted by advertisements, DramaNice is the place to go.

DramaNice also delivers appropriate English subtitles for your requirements, in addition to a large selection of HD quality dramas at a fast streaming pace.

GoodDrama is a fantastic subscription-free service with a large library of Asian drama films. This website’s material is organized into categories, making it simpler for you to explore and find what you’re looking for.

The majority of the dramas accessible are from Korea, but you’ll also discover material from nations such as Japan and China.

The greatest thing is that this is a free website with a big selection of Asian dramas, as well as the most recent dramas from Japan, China, Taiwan, and other countries, neatly organized into categories such as mystery, suspense, action, detective, and so on.

Since the 2000s, Asian drama has been winning hearts.

Viewers are a valuable commodity in any culture, especially a capitalist one, and when a cultural product has a high watching rate, its popularity rises naturally.

One such prominent cultural output is Asian drama. What, though, is the source of this popularity?

Love is the major topic, unlike any other play, and it is tailored to the setting of each unique nation. Aside from that, family values are frequently exploited in such plays to give their sentiments and emotions a sense of normality.

Characterization, in addition to the subject, is also significant. While the male characters embody an ideal Asian identity—beauty in masculinity, wealth, and kindness—Asian women are presented as beautiful, powerful, and mainly protected by the men in their lives.

In light of the above, the flow of Asian drama series is nothing more than a regionalisation process.

For example, in Malaysia, a drama series’ love theme is accompanied by current popular themes such as forced marriage, love after marriage, or getting married at a young age, all of which are familiar to Asian audiences.

Unlike American dramas, Asian dramas are very short-lived, with most series lasting around 12 to 13 episodes and seldom lasting more than a couple of seasons.

This enables fans to binge-watch a program, as opposed to having to watch a show like The Sopranos or Game of Thrones from beginning to end.

Asian drama has become one of the most popular genres in the globe in recent years.

The websites and applications described above are the suitable places you’ve been searching for, whether you speak the language or wish to view series with English or Spanish subtitles. Don’t forget to test them out and see which one works best for you.

Best Chrome Extensions for Twitch TV [2022] is a related post.

Do you want to brush up on your knowledge of Asian drama and the websites where you can watch it? Take a look at these:

Q. What is the difference between Asian and Korean dramas?

Q. Why are Asian dramas quickly becoming one of the most popular genres in the world?

The stories, characters, locales, and production qualities that seem fresh and unusual to people throughout the world are maybe the most important reason why Asian Dramas are seeing an increase in popularity.

Aside from that, Asian dramas have a far greater cinematic quality, cultural appeal, delectable cuisine, depth and clarity of emotions and involvement, and a perfect combination of the country’s pop culture unlike any other TV series, elevating them to a new level.

Q. Are there any other platforms where Asian dramas may be found?

Asian dramas are now being streamed on a variety of sites. However, there are a few that are top-notch and legally sound. OnDemandKorea, Anime TV, Amazon Prime Videos, KBS World TV, Dramacool, KShow123, and a slew of others are among them.

Q. If a website is prohibited, how can I view an Asian drama?

Due to legal difficulties, numerous K/Asian drama websites are often restricted in several countries. You may, however, unblock them using a VPN, proxy, or mirror site.

Q. Is it feasible to get free English subtitles?

Yes, English subtitles may be downloaded for free from a number of popular websites, including KissAsian, Quickdrama, Myasiantv, and DramaCool.

The “kocowa” is a website that provides access to Asian drama with multiple subtitles. The site supports English, French, Spanish, and many other languages.