The World Cup is one of the top sporting events in the world, with thousands of viewers tuning into each match. The tournament has been coming around every 4 years since 1930 and a proposal floated that would keep it at this time period but have it happen 3 times per decade to avoid over saturation among sports fans.

The “world cup every 2 years” is a topic that has been debated for a while. The idea of the World Cup coming every two years seems unlikely, but here’s what a compromise might look like. 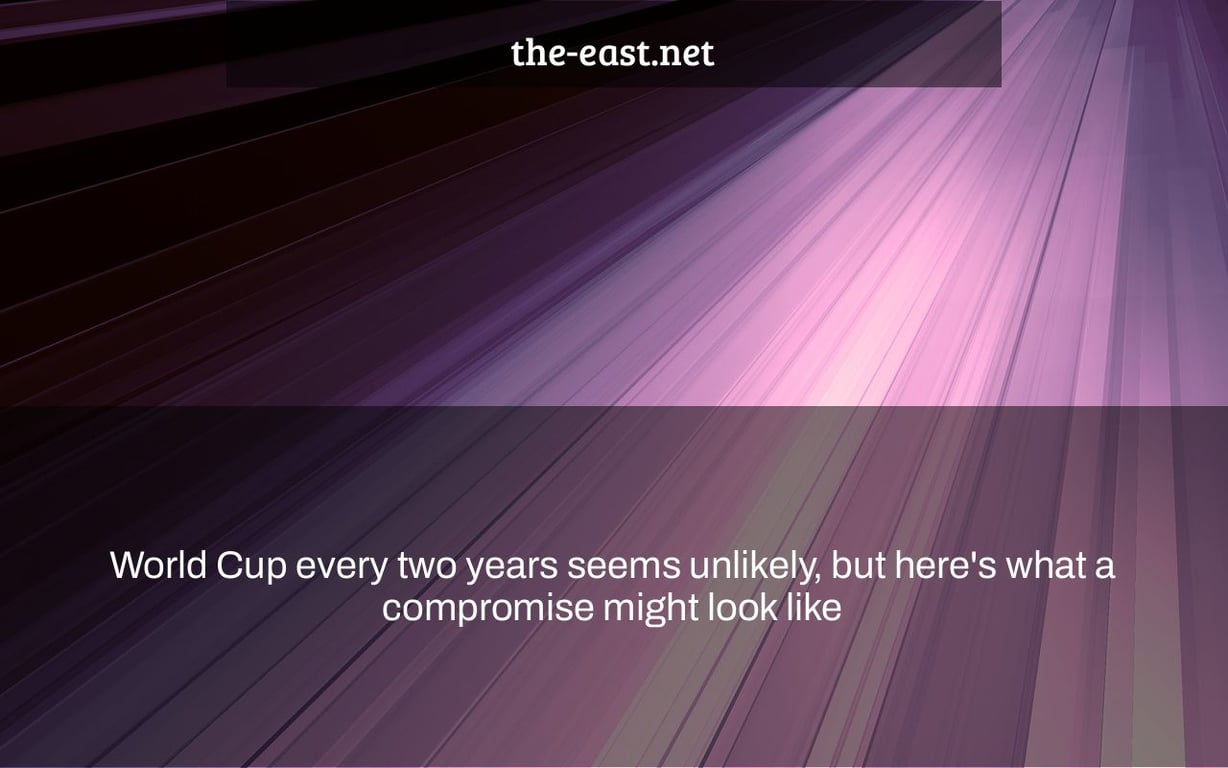 Speaking at a worldwide summit of FIFA member states on Monday, FIFA President Gianni Infantino said that a biennial men’s World Cup would likely earn an extra $4.4 billion in income during a four-year cycle (an increase of about 60%) compared to the existing quadrennial event. He indicated there was probably enough support among members to accept it right now, but he would have further discussions in the future in order to make bigger, more comprehensive adjustments.

Many stakeholders are hostile to the notion, including confederations like UEFA and CONMEBOL, organizations like the World Association of Professional Football Leagues and the players’ union, FIFPRO, as well as clubs and federations mostly in Europe and South America.

So, what exactly is going on here? Is it true that the World Cup will be held every two years? To help you understand what’s going on, here’s a FAQ.

Q: Why didn’t Infantino ask for a vote if he is so certain that a majority of FIFA members support the biannual World Cup?

A: Well, he did mention “probably,” so he may not be 100% sure. More practically, he recognizes that there is still a lot of pushback, mainly from some of the world’s richest and most powerful countries, beginning with UEFA and its members. There has even been talk that UEFA and CONMEBOL would boycott a biannual World Cup, and without them, you’re not going to earn the additional $4.4 billion.

Q: Why are they so diametrically opposed? Isn’t it true that they don’t want to earn more money?

A: Certainly, but they also want to be in charge of disbursing the funds. For starters, a biannual World Cup would require the relocation of regional championships like as the Euros and Copa America to odd-numbered years, resulting in a big event every summer. Because the World Cup is the most popular sporting event, and there are only so many sponsor and broadcast funds available, a biannual competition might eat into funding that would otherwise go to regional tournaments. Perhaps the additional $4.4 billion (if that’s a fair prediction; views vary) might help, but keep in mind that if you make money via your own tournament, you get to choose who gets it. The World Cup is organized by FIFA. FIFA has the final say.

However, there’s more. A biannual World Cup would also need redrawing the international match calendar, the master document that defines when all football, from club tournaments to international matches, is played. The current fixture calendar ends in 2024, so regardless of what happens with the World Cup, the game’s power brokers will have to come up with a new arrangement. However, balancing the requirements of clubs (which pay the players and provide the majority of the money) with internationals is a delicate environment. All of this comes at a time when numerous organizations, like FIFPRO, are warning that elite players are playing too many games, putting them at danger of burnout and injury.

Everyone wants a say, and committing to a biannual World Cup means blocking off another large piece of time on the calendar.

Q: If Infantino had the votes, couldn’t he have just pushed it through? Then work out the master timetable once it’s in place?

A: Yes, in principle, but it would have been something between authoritarian and irresponsible. Majority rule is excellent, but minority rights must still be protected. Wherever feasible, it is always preferable to govern by consensus.

Furthermore, CONMEBOL and, in particular, UEFA, led by president Aleksander Ceferin, not only seem intent to thwart Infantino’s proposal, but they also wield considerable power. After all, the majority of the game’s top performers are from South America or Europe, which is also home to the world’s largest clubs — who, understandably, prefer club football over international football. Europe and South America have built a strong bond to the point that South American clubs are likely to play in the Europa Nations League in the future (you assume it will be renamed if that happens).

Ceferin also has political support in Europe right now, thanks to his successful campaign to halt the Super League (aside from the three teams who are suing UEFA over the Super League: Real Madrid, Barcelona, and Juventus, but they presumably wouldn’t want additional international events too).

Q: So why is Infantino continuing pursuing this if that’s the case? Is it all about the money?

A: Sure, but no one should be surprised. This was the subject of a piece I wrote a while ago. FIFA wants to generate more money, but it’s not like they’ll simply sit on it once they do. They re-distribute the funds to their 211 global members. The more they redistribute, the happier the members become, and the more likely they are to vote for the FIFA president to be re-elected.

FIFA’s stated purpose is to improve the game. That requires planning and infrastructure, both of which are costly. FIFA provides the majority of financing to the majority of football federations across the globe. And the men’s World Cup generates more than 90% of FIFA’s revenue. So the easiest approach to increase income is to either wring more money out of a quadrennial World Cup or to host it more often.

Q: What about independent research on the economic effect of World Cups held every two years? Do we have any idea what the effect might be?

A: FIFA commissioned Nielsen, who calculated an extra $4.4 billion in revenue if the World Cup were held every two years. They also discovered that if every confederation hosted a biannual continental competition (as some currently do, like as CONCACAF and Africa’s CAF), an extra $6.6 billion would be generated every four years. Another FIFA research, this one by an organization called OpenEconomics, which focuses on macroeconomic effect, says that a World Cup every two years would enhance the global gross domestic product by more than $180 billion and generate 2 million permanent employment over 16 years.

Isn’t that appealing? In addition, UEFA commissioned an analysis from Oliver & Ohlbaum, which estimated that shifting the international schedule to accommodate a biannual World Cup would cost European federations up to $4 billion in income. The World Leagues Forum conducted their own research, which was even more pessimistic. This analysis, conducted by KPMG and Delta Partners, estimates that $9 billion in revenue, matchday income, and commercial deals would be lost.

Dan Thomas is joined by Craig Burley, Shaka Hislop, and others to discuss the most recent news and debate the most important topics. ESPN+ has a live stream available (U.S. only).

A: Well, he has a simple approach to reframe the discussion. Make it about European billionaires refusing to share the financial pie with the rest of the globe. Then, even if the biannual Globe Cup never happens, you’ll have the backing of the vast majority of the world since you at least tried.

Q: So, what do you think the most probable conclusion is?

A: I don’t believe we’ll see a biannual World Cup, but I believe there will be some type of compromise where everyone takes a step back and makes a sacrifice. It’s one of democracy’s dangers. There are 211 FIFA member countries, and more than half of them will only ever watch the World Cup on television. At the same time, they are unlikely to survive without FIFA’s direct backing. Obviously, they’ll want more chances to qualify and, even more importantly, as much money as FIFA can provide. They may elect a different president if that happens.

As a result, FIFA is adamant on increasing income. If there isn’t another men’s World Cup, it may be a different tournament, one that generates cash without requiring a whole new qualification procedure like the World Cup. It might be a reborn (and enlarged) Confederations Cup, with berths allocated for the current world champion, the next World Cup host country, champions of regional tournaments, Nations League winners, and whatever else is needed to get to, say, 16 teams. Many of the major hitters would still be there, but the event would be shorter and less disruptive.

Another option, in my opinion, is to have a Club World Cup every four years. Even if the clubs demand a share, this would very certainly be more profitable. And you have to wonder how UEFA would react to that, considering that the majority of the money and attention would come from their large clubs.

But achieving an agreement on the international match schedule is just as vital. There seems to be general agreement to limit the number of foreign breaks (while lengthening them), but how and when they are scheduled must be worked out. There’s a natural cliff edge here: if international football doesn’t strike an agreement at least nine to 12 months before the existing arrangement ends in June 2024, it would be financially disastrous for the sport, since planning and selling broadcast and commercial rights will be difficult.

And if there’s one thing that all of football’s power brokers have in common, it’s that they don’t appreciate being smacked in the pocketbook.

How to farm for Arataki Itto in Genshin Impact

How No Way Home Sets Scorpion and J. Jonah Jameson as Villains in Spider